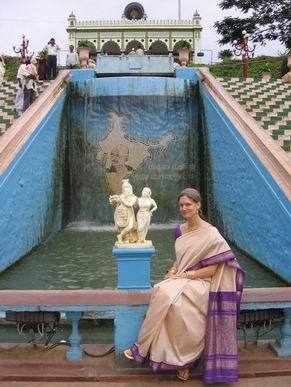 Kali Om (she/her)  is has been teaching yoga since 1998 and is a disciple of Sri Dharma Mittra. A former adjunct professor of yogic studies at DePaul University, she is author of the 2018 book, Beyond the Mat: Don't Just Do Yoga - Live It.

She began practicing yoga shortly after her mother died, in April of 1997. In that first class at the YMCA, she experienced a sense of profound peace for the first time in her life. After taking every class offered, she started practicing with Suddha Weixler at the Chicago Yoga Center (aka N.U. Yoga Center), where she often took class twice a day. In 1998, one of her teachers, Eric Powell, was leaving the city and suggested she enroll in Suddha's teacher training and take over some of his classes. Content to remain a student, she refused. He asked again. She refused; he asked again. Finally, she agreed.

Since then, she has completed 200- 500 and 800-hour trainings with Sri Dharma Mittra, who gave her the name Kali Om. She is a longtime teacher of ashtanga and Dharma Yoga in Chicago, and is certified beyond the highest (ERYT-500) level.

Kali also made five trips to Mysuru, India to study with K. Pattabhi Jois and family at the Ashtanga Yoga Research Institute. She has also completed teacher trainings with Suddha Weixler and Manju Jois. She is grateful have had the privilege to learn yoga from these linage holders, and strives to reflect their authenticity in her own teaching.

She is also certified in Accessible Yoga, Therapeutic Yoga, Yoga Nidra, Senior's Yoga, Prenatal Yoga, Rocket Yoga, Gentle/Restorative Yoga, Psychic Development and Hormone Yoga Therapy for Menopause. She also teaches pranayama (breathwork), meditation and Psychic Development.  In addition, she has studied with a long list of master teachers. Her articles about these experiences are archived at the Yoga Chicago website, which is where her "Beyond the Mat" column and cartoon, "On the Mat," also appear.

Kali leads 200-hour teacher trainings, has been a lead instructor for the Chicago School of Yoga's teacher training program, and is co-chair of the Vivekananda East-West Yoga Festival held each January at the Hindu Temple of Greater Chicago. She's also a Yoga Alliance YACEP (continuing education provider).

She continues to study yoga with Sri Dharma Mittra and others; Vedanta (yoga philosophy) with Jim Gilman of The Silent Way in Oakland, CA; and to sit in the presence of Gurudev Swami Bhubaneshwarananda in Jaipur, India.

Since 1998, Kali's writing - including her India diaries, workshop and restaurant reviews and her "On the Mat" cartoon - have appeared in Yoga Chicago magazine - where her "Beyond the Mat" column also appears.

A journalist for over 30 years, her byline (as Cara Jepsen) appeared in The (UK) Guardian, Salon, Brink.com, Billboard, Book, Chicago Magazine, Chicago Reader, Chicago Sun-Times, Chicago Tribune, Time Out Chicago, NewCity, and Crain’s Chicago Business. From 1993 to 2013 she was the media columnist for the Illinois Entertainer, and for eight years she wrote the Chicago Reader's "Days of the Week" Calendar. She's written film and music criticism for the Reader and music criticism for the Chicago Tribune. She also contributed chapters to the books DK's Real City Chicago guide and SPIN Underground USA.

A former filmmaker, she has taken bows at the New York Film Festival, and her video "Public Enemy" appeared on the WTTW-Channel 11 program "Image Union."

Her radio essays aired on the WBEZ-FM program "Eight Forty-Eight," and she was a yoga columnist for Conscious Choice magazine and a vegetarian food columnist for The Local Palate. She was also a music columnist for the Windy City Times.

From 1983 to 1997 she was a punk rock DJ at venues in and around Chicago - including Club Dreamerz, Lizard Lounge, Club Lower Links, Crash Palace and Delilah's.